Thank you all for coming!!

This Year’s First of August celebration started out at the new location at the Sardis Clubhouse – well known to all of our Raclette event fans. Thank you all for participating and contributing to this great event. Nevertheless it’s a big challenge for all the board members and volunteers to organize an event at this level – therefore – please let’s thank them for their great work and willingness to do so. Thank you very much!!

This year we have been able to welcome our new Consul General of Switzerland in the Southeast, Urs Brönnimann and his wife Katrin. We wish him and his family all the best for their new challenge in Atlanta.

Last but not least we would like to specifically thank our “Grillmaster” for his hard work.

There are additional events planned for this Year – so please come back and check our event calendar. As always – check out the Gallery for more pictures.

A great evening to remember!

After a long time not being able to see familiar faces – the traditional Raclette event opened the doors for all friends of the Swiss Society of Charlotte.

Under the guidance of Angelika Brunner (President) and many volunteers the event took place at the Sardis Club House. Thank you very much for organizing this event.

More pictures are available in our gallery.

Finally – after a long time waiting to see some familiar faces the Swiss Society of Charlotte invited to the traditional August 1st Celebration to the RedFez facility on Lake Wylie. 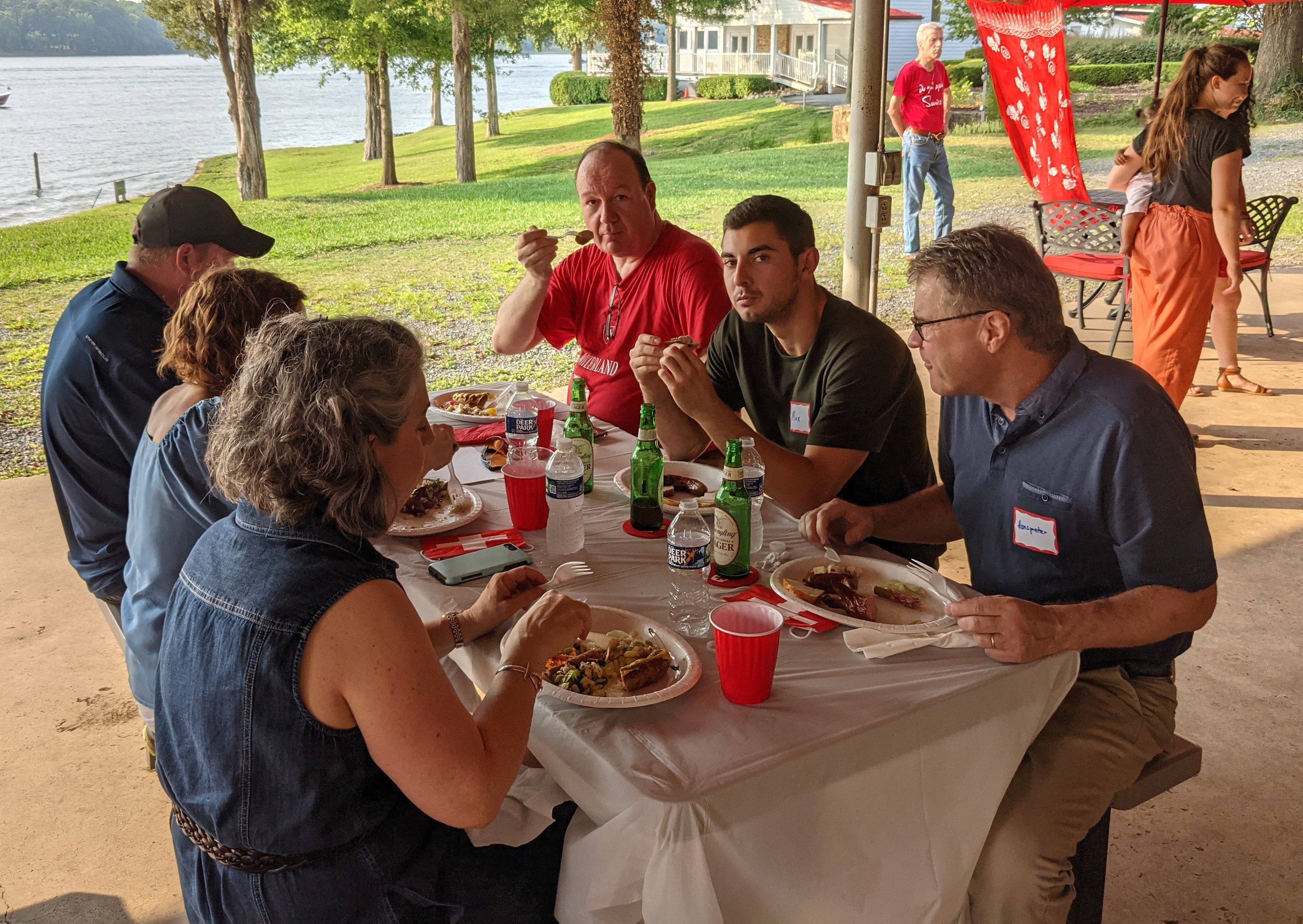 All participants really enjoyed the traditional Cervelat/Bratwurst/Fleischkäse and the tombola. As usual also the kids had a lot of toys to play with.

Imagine the most seen color was actually ‘red’ with a well known ‘white’ positive plus (+) sign.

Big thanks to everyone organizing and helping to get the tradition rolling. Looking forward to seeing all of you soon again.

He was 88 years old and was a long time member of our society.

Our condolences go out to his wife Carol and his family.

Last Saturday we met again at the Sardis Club for our annual Raclette. We had a good turn out with 67 attendees. Raclette started being served at 7 o’clock and there was more than plenty of cheese, salads and potatoes to be had. All could fill their belly with delicious desserts after the Raclette and a good time was had by all attendees. We are looking forward to next year’s Raclette.

Unfortunately some people didn’t get the emails sent out, rather, they went directly into the junk/spam folders due to embedded links. Everybody, please add the swisscharlotte.com to your “White List” or “Approved Sender List” to guarantee you receive all Newsletters from the Swiss Society.

If you have any suggestions for the next Raclette, please write to President@SwissCharlotte.com. Thank you!

Markus Bersinger on behalf of the Board

Last Night we have been able to enjoy the 33rd annual meeting of the Swiss Society of Charlotte. It was a festive event and we all enjoyed the great food prepared by the Chef Mario Thom.

We would like to thank all the volunteers, especially the members of the board, which are working very hard and diligently to make all those events a memorable and enjoyable event.

If you missed it, please take a look at the Event Calendar and mark every single day already now in your calendar. You wont be sorry!

Looking forward to seeing you at the next celebration of the Swiss Society of Charlotte.

The annual Jass Event took place on April 13th, 2019 and we are proud to announce that we have a new Jass Champion:

We congratulate Albert Hess to his first Champion Title – at the end – he had almost 100 points more as our defending Champion from last Year, Heinz Roth.

The biggest trophy this Year went to our long term member, Lisa Siegenthaler – and she promised to train much more this Year to get ready for next Year.

For this years annual meeting we welcomed 48 members at the Da Vinci restaurant in the Hilton Executive Park Hotel.  Prior to feasting on delicious appetizers and an exquisite meal prepared by Swiss chef Mario Thom, the president, Markus Bersinger, held the meeting.  After a quick review of the past year’s events, the finances were presented and unanimously approved.

Unfortunately we had to say goodby to two board members, Manuela Corbetti our treasurer and Corinne Staub our secretary.  In their place we elected Ingrid Sapene as treasurer and Christian Hidden as secretary.  The two vacant board positions are filled by Lorena Riedener and Arnold Bucher, both as members at large.  We thanked Markus Bersinger our president for staying for another year, Maggie Deller-Haight as Vice President starting her second year of her fist term  and of course Marco Deillon our long term member at large and bar man at every event.  The entire board was confirmed with loud applause.  After adjourning the meeting the president opened the appetizer buffet, which was followed by an exquisite dinner selection.

As in past year’s Christian organized a super raffle with prizes like a fondue pot, liqueur and many other good prices to be won.  The income of the raffle topped $ 700.00, which entirely benefits the club.

A good time was had by all in attendance  and the crowd started thinning after 10pm and the meeting was officially closed at 11pm.

For this year’s hike we gathered at Latta Plantation.  Unfortunately not as many folks attended, though the weather was perfect!  The hike was very nice and we have great picture as well, visit our gallery to view them.  After the hike those who wanted could go kayaking which was super with only one down side, kids under 16 weren’t allowed to join.  We grilled sausages and had lots of other goodies to feast on.  Even though we were only about 20, all had a good time and I would say those who missed it missed a fun afternoon with great comradery.

Photo of the day 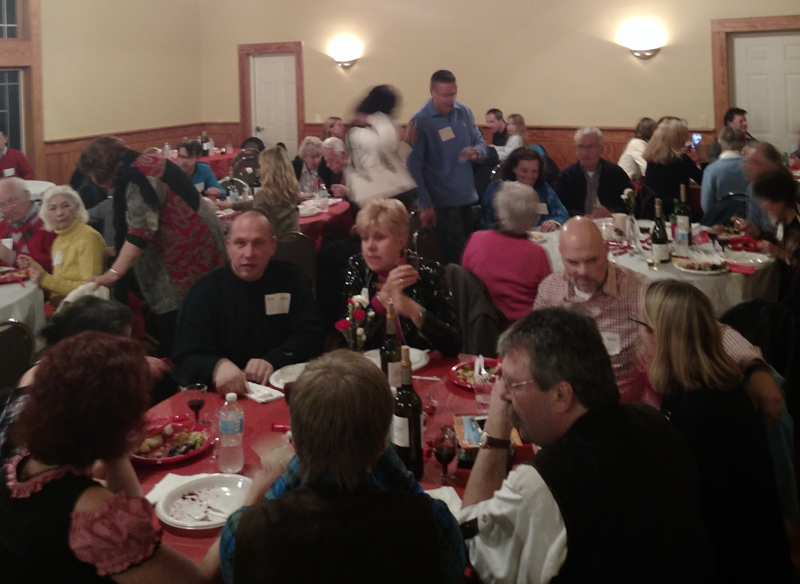